While we fell in love with Colorado, our time there was beset by bad luck. The infamous US government shutdown took us by surprise and had us shocked for days. For months we had looked forward to camping in the Rocky Mountains and in Mesa Verde, and now we were locked out. Every day, we’d watch the headlines, as intently as every American we met, and waited for the country to open. We were outraged by the discovery that politicians are the same around the world. (Well, except Obama, because we love him!)

At the same time, the country had 16 storms passing over it, at the same time! And to make matters worse, Colorado received early-for-the-season snowfall and icy temperatures – making us pack up our tents in a hurry and head for the nearest motel. We sulked indoors, filling our time with surfing the net, watching television, reading on our Kindles and blogging.

So when Utah – miraculous, beautiful, magnanimous Utah – announced with some fanfare that they’d be opening up their national parks, we packed up our stuff and hightailed it to Arches National Park. We were itching to smell some campfire smoke and sleep in our tent and wake up to the open skies, and boy, did Utah come through!

We were greeted close to the entrance of Arches National Park with this miracle of nature – Balanced Rock, rising almost 130 feet above the ground. And that’s how we knew we were in for a spectacular time!

The fresh, cold air had us feeling light and energetic, with feet itching to hike. And…um… perform clumsy acrobatic poses on cliffs!

Being silly at Mesa Arch, Canyonlands

Landscape Arch was stunning, but unfortunately you can’t hike up to it to inspect it from underneath now. Huge slabs still fall off from under the arch, eroded by wind and other forces of nature, and it’s not safe. But you can stand and admire it as long as you like. Which we did.

You can also pose in front of it, making it one of the most awesome backdrops ever. Which we did.

At the trailhead of Devil’s Garden, with Landscape Arch as witness

Then we started the 7 mile Devil’s Garden hike which took us down paved paths, over massive rocks and scrambling up steep inclines to visit all the arches in the park.

It was the perfect day to get to the highest point you could, to watch clouds float by.

A panoramic view at the top of the rocks in Arches

It was also the perfect day to get in a ‘Cliffhanger‘ moment. If only there were ropes to hang upside down from and drop a glove! 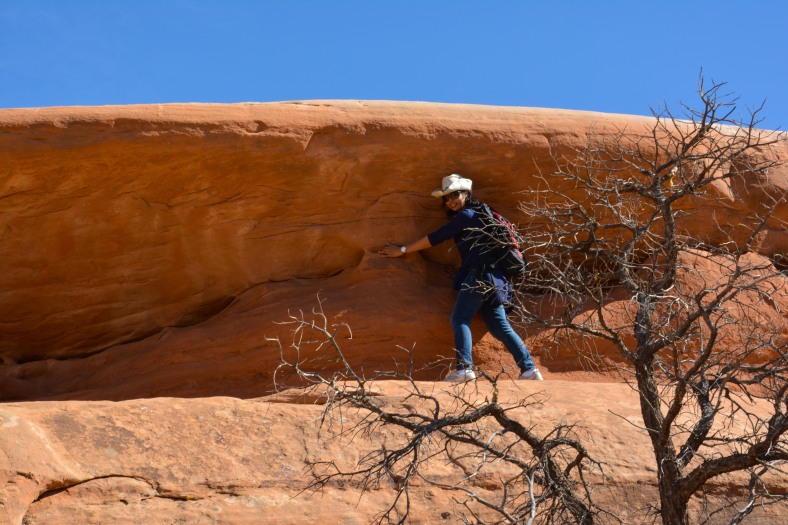 Risking my life for a photo op!

If you have a clear day, you can see far into the distance and admire the view from under an arch or two. 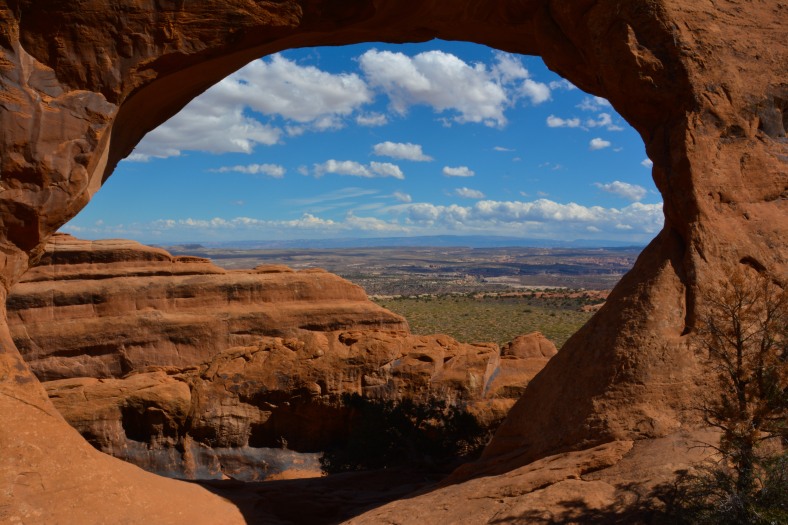 A view through the arches, at Arches NP

And while few clouds meant high visibility, it also meant a pretty hot day. The rocks start to bake and emanate heat that warms the soles of your shoes as you climb. So we were glad to hike down into small valleys that were shaded and cool.

Shadowplay amongst the rocks

And then it was up another surface again.

“Flying would be easier than this long hike up”

But who has time to fool about when its almost time for the sun to go down? We ended up speed-walking up to Delicate Arch, the best place in the park to watch the sun set over the rocks.

The rocks reflect the changing colours of the setting sun, turning pink, orange and red and finally darkening to merge into the night.

The reddening skies of Utah

The hike to Delicate Arch goes along a long, slow incline, weaving through multiple paths between vertical rock faces and flat rock tops, but you can’t see the arch until you’re actually up at the same height. So when you round that last corner, sweaty and thirsty and tired, you burst upon it. And it takes your breath away.

Delicate Arch – the state symbol of Utah, and rightly so

Then you walk up under it and you realize how small it makes you feel. And how long it has been witness to the passing decades. The silence of the space envelops you and your soul. It crosses your mind that if world leaders and politicians came here more often, we wouldn’t have wars and bombs and boundaries and prejudice. 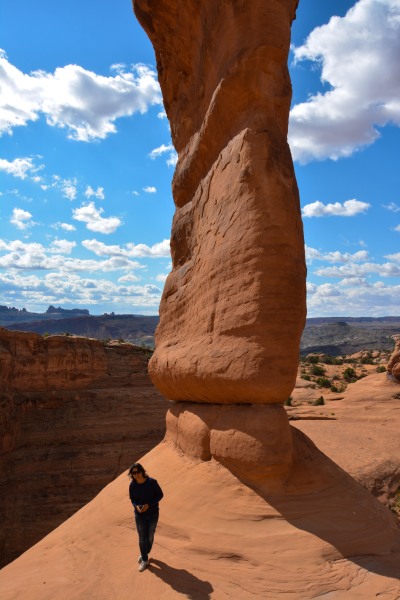 You look around and your mind fills in the eroded spaces under the arches, adding a little sandstone here, a little tree there, and maybe even a dinosaur. With a bit of imagination, this whole park could be the setting for another sequel to Jurassic Park. 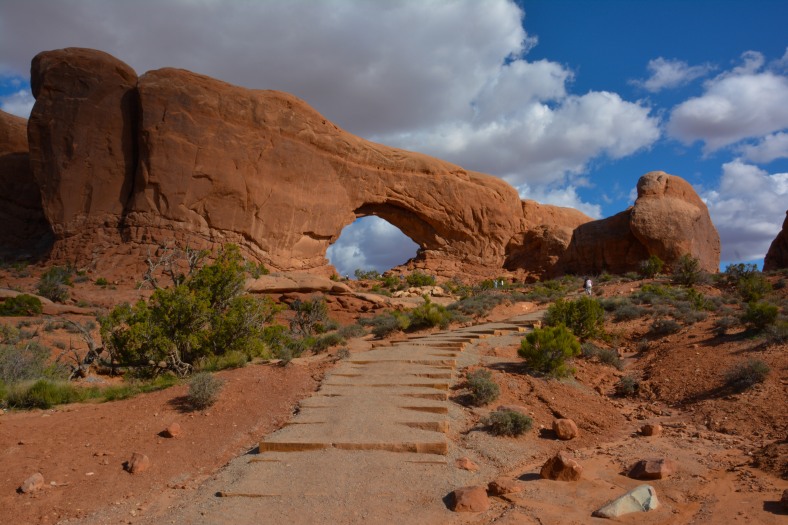 The Windows trail at Arches NP

But while it is fascinating to think of giant reptiles wandering around when the sun is up, it gets a little worrisome when the sky starts to turn indigo for the night. 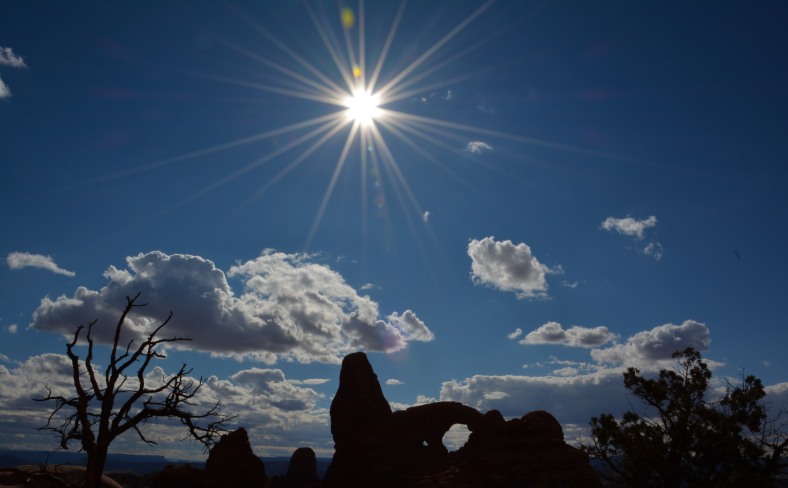 You decide that you wouldn’t really want to meet any reptiles out here, giant or not-so-giant. So you start heading back to your campsite. But not before you stop to admire the magnificent outlines of the arches against the night sky. 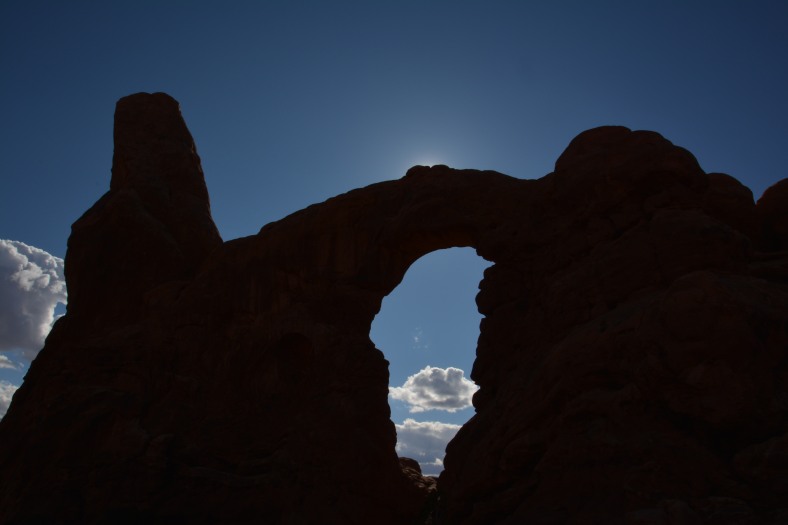 A patch of blue sky, a puffy white cloud, and an arch from ancient times

And at night when you crack open that first beer, you tell yourself, “Well, yesterday I was sitting in a motel watching other people do cool things and explore the world on television. Today, I did some pretty cool things too.”

Except maybe for the acrobatic pose. That wasn’t so cool.

5 thoughts on “Utah to the rescue!”