Memphis is like that kid in school who was so cool, you wanted to be just like him, and live his life for a day. You know the one I mean? Who made just standing around look cool; the one whom everyone wanted to be friends with. But now, when everyone’s grown up and moved on, one day you see that kid on Facebook or meet him on the streets. And somehow he isn’t that cool anymore. Maybe he has a loser job, maybe he’s single and sad, maybe he’s lost the cool, you can’t quite place it. But in a moment of shock, you realize that maybe, just maybe, his star burned brightest in school.

The desolate streets of Memphis

That was Memphis for us. Arriving on a weekday evening, expecting to be hit hard by the swagger of a town known to be the birthplace of American rock ‘n’ roll, we thought it was a bit of an anti-climax. The roads were deserted, the urban landscape flat and uninspiring, and the dark shop windows at 7 p.m just looked like sad, hollow eyes. We couldn’t believe that M-e-m-p-h-i-s, the most named city in American music, was only this much, so we slept on it and went out the next day looking for the city that gave us legends like Elvis. Maybe it’s wrong to judge a place in just two days, but personally, the next day too, the city failed to sweep us off our feet.

More desolate streets…Come ON Memphis! You can do better!

However, hold on a minute before you take it off your list of places to visit! Memphis also held two of the must-do items we’re adding to our list of recommendations and for that reason, we won’t be forgetting it in a hurry.

The National Civil Rights Museum stands opposite the Lorraine Motel where Martin Luther King was assassinated. It is a beautiful memorial to one of the most inspiring leaders we’ve known, and a well laid-out museum to boot. With a descriptive timeline of the assassination, a detailed dive into King’s life and beliefs, a profile on James Earl Ray, as well as a brief look at the conspiracy theories around the murder, it leaves you thinking. You can actually stand at the window from where the bullet was fired, and look at the balcony at the motel opposite. A separate section in the museum also takes you through the civil rights movement, and is equally poignant.

The Lorraine Motel where Martin Luther King was assassinated

The scene of the shooting of Martin Luther King

The street outside the motel is beautiful and serene, with hymns playing on speakers while travellers come to pay homage. This one should be on your list of places to visit.

We went from there to a dramatically different world: The American Rock and Soul Museum. We learned about the history of the music that defined a generation, and saw actual outfits and memorabilia from the legends themselves. Glimpses into the lives of indulgent artistes surviving the incredible highs and terrible lows of stardom, dealing with drugs, love affairs, scandal – you could say the afternoon passed without us noticing! 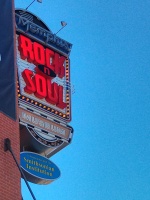 The beating heart of Memphis

Some of these instruments have created sounds that you hum now along with a song!

Blasts from the past: jukeboxes used by Elvis and others

Posters and artwork from the archives

The most important member of any band: the tools!

Later that night we headed down to Beale Street, once upon a time a mecca for musicians and aspiring singers. Now it’s a cluster of bars and pubs and Elvis memorabilia, but the music is still great! We were all partied out from Nashville, so walked down to the far end which was quieter. And there we found Adam Warren – street singer, Southern fried chicken, and Blue Moon beer. It was a pretty good night!

Elvis memorabilia of every shape and size

The party zone at Beale Street

So go to Memphis to see the must-sees, but don’t expect the cool young kid from back in the day! Memphis is a little older, a little wiser, and a little more scarred. But the beating heart of Memphis doesn’t lie in its streets. It lies in the cool recesses of these museums and memorials, and tells of stories of sinners and of saints.